Originally posted at The SoulfulMBA for Lorry I. Lokey Graduate School of Business Net Impact Chapter at Mills College

Last week we lost one of the greatest pioneers in tech industry history, Steve Jobs. Jobs, founder and former CEO of Apple Computers died of pancreatic cancer last week amid a

media storm created by the Occupy Wall Street Movement (#occupywallstreet). The legacy of Steve Jobs is intimately tied to this and other international movements that are stirring the dialogue regarding corporate social responsibility.

As with the death of any other public figure, the minute details of his life have been dissected, including his use of LSD (acid), which he claimed was one of “the two or three most important things” he did in his life. This statement epitomized the 1960s counter-culture movement that fought for racial and gender equality and civil rights. What Jobs took from his experiences as an acid-tripper and 1960s revolutionary is a desire to question the entrapments of technological reality. This envelope-pushing future-minded thinking is an inspiration to those who wish to challenge a political and socioeconomic reality by forcing those who want to create real change to think far, far outside the box.

Jobs’s forward thinking brought reform to the technology industry. Rather than locking away the potential of computers for the technological elite, he designed Apple products to not only be fashionable and functional but extremely user-friendly.  Jobs inspired a generation of web developers who have revolutionized the way we revolution.

“Jobs inspired a generation of web developers who have revolutionized the way we revolution.”

Which brings us to the counter-culture movement gathering in opposition to corporate greed and government corruption, Occupy Wall Street. In the early part of the year, Egypt and Tunisia harnessed the power of American technology and social media to organize the protests and movements that brought down their governments, dubbed the Arab Spring.

Taking a better-late-than-never cue from the Arab Spring, young tech-savvy Americans have been harnessing the power of our domestic technology industry to rail against corporate greed.

Many of the protestors are Tweeting and Facebooking from their iPhones, supporting from home on their iPads, Macbooks, iPods and iMacs and dispersing information through podcasts in the iTunes store.

Thanks to Steve Jobs, technology has played an integral part in practical everyday functions and international revolutions. The life and legacy of Jobs reminds us that thinking outside the box and not within is the clearest path to real change.

Protestors occupying Wall Street and other cities across the U.S. owe Jobs a great debt of gratitude for opening up a world of reform and possibility, albeit through corporate profiteering.

On a recent appearance on the Daily Show with John Stewart, economist Thomas Friedman commented on both Jobs and the movement saying that he sees the economic future of the United States as being the place where people come to create things. Jobs created social change by creating the tools that would become the medium for it, not to discredit Facebook or Twitter. 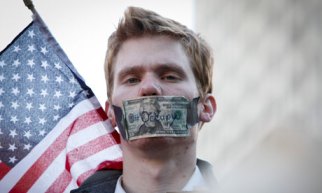 And so the message here is that social change does not have to be created at the expense of business, but instead focus on regulation of the industry and corporate social responsibility so that every American can have the opportunity to become a great creator, and maybe even the world’s next Steve Jobs, Mark Zuckerberg or Biz Stone. These protestors want a technological world full of Jobs-style jobs and they have Jobs to thank for making it possible.